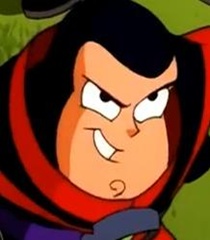 Biographical Information
Physical Description
Relationships
Powers and Abilities
Production Details
Zzub is one of three child clones created by Zurg, and the clone of Buzz Lightyear.

He is a clone of Ranger Buzz Lightyear as a child, approximately between the ages of 6-7 years old.

Alongside Feara and Blister, Zzub was originally created by Zurg and his Brain Pods to fight Team Lightyear and take their places in Star Command. But because Zurg was in a rush to have the clones out and ready to fight, he removed them from their tanks before the clones had a chance to grow into adults. Thus, they emerged as young children.

His personality is not so very different from how Buzz might have been as a child; he is headstrong, impulsive and likes to be in control. He is, however, a good deal nastier than Buzz probably was.

Retrieved from "https://blosc.fandom.com/wiki/Zzub?oldid=24882"
Community content is available under CC-BY-SA unless otherwise noted.