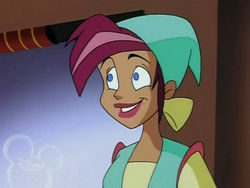 Zoey is a human female, possessing all the traits of one. Hair of maroon and eyes filled with blue, her skin is slightly tanned and the woman is of average height.

Seen in two timelines, Zoey is first revealed in the series when Buzz Lightyear stops onto a far-off planet to rest where Zoey and her son, Myka, live. By either fate or chance, he ends up saving Zoey's farm and fighting off Vartkes, a mean and nasty gas baron who extorted the locals for his own selfish endeavours. After Lightyear leaves the time spans twenty years into the future where Zoey is seen riding a puffer along with her grown-up son.

A rough gal who isn't easily pushed around, Zoey is as concise as her boomstick's business end when she points it at you to get off her property. She carries a mistrusting attitude towards outsiders and tends to rely on herself and her son, Myka. She knows what it takes to live out in the frontiers of space where not even the law dares to go.

None, besides being tough and knowing how to use a gun.

Retrieved from "https://blosc.fandom.com/wiki/Zoey?oldid=24600"
Community content is available under CC-BY-SA unless otherwise noted.