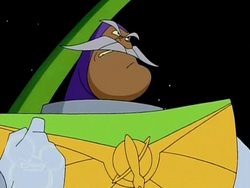 Nebula is the commander and founder[2] of Star Command and Buzz's superior. He is best known for his short temper and no-nonsense attitude.

Although an aging human, Nebula is well-built, with a broad chest and shoulders. He has dark tan skin, a large chin, and possesses a gray mustache, complete with gray eyebrows and hair. His mustache occasionally mirrors his mood by curling or prickling whenever he is agitated. His left leg was cut off at the knee at some unknown point, and has been replaced by a peg leg which doubles as a plasma cannon. He wears a green and white spacesuit with a golden Star Command logo on the chest and also wears a purple headcap like Buzz.

Sometime in the past, possibly before Nebula became the Commander, he assumed the role of undercover bounty hunter Shiv Katall, and smuggled defecting minions from Evil Emperor Zurg into the Galactic Alliance. However, he later passed on the role to Buzz Lightyear, though whether it was due to old age or the loss of his leg is unclear.

Loud, hard-headed and somewhat abrasive, Nebula is known for his gravelly voice and hatred of all things bureaucratic, including paperwork.

He is an excellent commander, as he never orders his Rangers into a situation he would not go into himself. He is not known for tolerance toward insubordination, though he has the grace to admit when he's made a bad call. It's worth mentioning that Nebula can act like a stern father to his Rangers when he needs to, whether it's keeping them out of danger or talking some sense into them.

It's noted that Nebula hates robots, but he does seem to be getting better about it, slowly accepting XR and XL into the Star Command community.

His peg leg doubles as a plasma cannon.