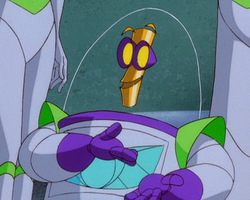 XR is a robot that sports Star Command's colors (purple, green, white) and logo on his chassis. He has a disembodied gold/bronze-colored head with yellow optics, encased purple circles and green eyelids. However, sometimes the optics appear green or red depending on his mood. He possesses short arms and legs which can stretch out to any length he wants. He also possesses continuous treads encased in green for feet and purple hands. His head is surrounded by an oval glass dome.

The Xperimental Ranger, or XR for short, was created by the LGMs as the second robot Space Ranger, following the failure of the original XL model, programmed to learn from one of the best Rangers, Buzz Lightyear. On his first mission, he imitated Buzz repeatedly during their attempt to save the LGM homeworld from the Evil Emperor Zurg's dark forces, and was destroyed by Buzz's old partner in Zurg's employment, Warp Darkmatter (now Agent Z). The LGMs attempted to rebuild him, but the loss of their Uni-Mind to Zurg left them off their game, leading them to rebuild him with improper parts. This gave him a human, less proffesional personality, and he was temporarily reassigned as a janitor alongside Booster Munchapper until he eventually joined Buzz's team after helping him save the galaxy from Zurg's Uni-Mind powered mind control machine.

Originally XR was obedient, imitating all Buzz's actions to learn how to act as a ranger. However, after his reprogramming he developed a huge ego and sarcastic humour.

Despite having great intelligencem XR's personality is deeply selfish and self-serving, frequently looking out for his own self-interests rather than the good of the universe. Should an opportunity for money, women or fame present itself, XR's priorities are known to flip in an instant. He is as childish as Booster's via the fact that he tends to crack jokes at the worst times in most episodes. He also gets cocky after a single success, yet fearful after he can't repeat the same success twice. Despite his numerous personality flaws, XR is genuinly loyal to his friends and team, and at his core is a dedicated Space Ranger.

Retrieved from "https://blosc.fandom.com/wiki/XR?oldid=24868"
Community content is available under CC-BY-SA unless otherwise noted.