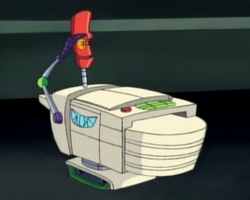 XL was originally created by the LGMs to be the first robotic Space Ranger, but due to his violent and destructive personality, Commander Nebula gave the order to shut him down. Afterwards, all the information on XL was placed into the XL file, which was made Top Secret and accessible only to the Commander himself. This event was what led to Nebula's prejudice against robots and the idea of a robot ranger in particular, though like XR after him the LGMs got permission to build him by sneaking the authorization forms in with their vacation requests. Some time after XR was built, the Evil Emperor Zurg reactivated him, and XL had every intent to take revenge upon Nebula for shutting him down. Stealing parts from various robots and top-secret facilities, he built himself a new body before going to Star Command in search of Nebula.

XL later hired Torque to bring him a special component on Tradeworld, which allowed him to upgrade himself with more powerful robotic limbs. Though he initially posed a considerable threat to Team Lightyear, he was defeated yet again when Booster Munchapper, under the influence of Jo-Adian Bunzel Fever, ripped him apart after mistaking him for a Bunzel.

Retrieved from "https://blosc.fandom.com/wiki/XL?oldid=24867"
Community content is available under CC-BY-SA unless otherwise noted.