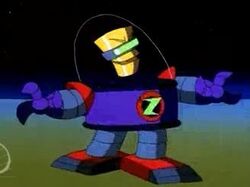 Biographical Information
Physical Description
Relationships
Powers and Abilities
Production Details
X-Treme is the robot based on XR built for the Clone Rangers.

He is an evil counterpart of XR with many differences. He has a purple and navy blue body with the Zurg insignia. His head is bigger than XR's head and has a green visor instead of dark green/yellow eyes. His hands have three fingers, which are clawlike in appearance.

Retrieved from "https://blosc.fandom.com/wiki/X-Treme?oldid=25982"
Community content is available under CC-BY-SA unless otherwise noted.