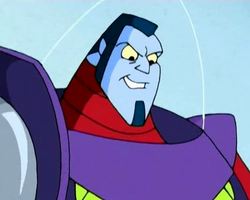 Biographical Information
Physical Description
Relationships
Powers and Abilities
Production Details
“Evil is just so much more profitable
than good—and more fun!”
Warp Darkmatter is a former Space Ranger who was secretly working as a double agent for the Evil Emperor Zurg for close to twenty years. After faking his death, he went on to work for Zurg, acquiring the short-lived moniker "Agent Z" before he was discovered and opted to openly commit crimes under his actual name.

Warp has periwinkle skin and navy hair he keeps cropped short, flanked by sideburns, though in his Academy days, he had curly, afro-like hair. He sports a chin-strip beard and he has sharp, squarish features. He is broad-shouldered and muscular, and is usually seen wearing body armor colored red and purple. After losing his right arm, he now possesses a cyber-biotic[1] arm with four claws that can morph into an array of weapons, including a flamethrower.

Warp Darkmatter was trained to be a Space Ranger at the academy alongside Buzz Lightyear, and the two developed a strong though competitive friendship. They worked well together and became a top-notch team as partners. Secretly however, Warp had begun accepting bribes from Emperor Zurg to act as his double agent within Starfleet, secretly acting against them for years.

One day, while searching a moon for three Little Green Men (LGMs) that had gone missing, they discovered a hidden base belonging to Zurg, who had kidnapped the LGMs. Buzz and Warp rescued the LGMs, but Zurg activated the bases self-destruct on his way out, and Warp ended up pinned under rubble caused by the fight. Buzz tried to free his friend, but Warp insisted that he leave him behind and get the LGMs to safety. Buzz refused, causing Warp to activate Buzz's rocket pack. It propelled him out just as the lair exploded, seemingly killing Warp.

Although originally possessing no powers or abilities beyond his peak physical condition, Warp Darkmatter's organic right arm has been replaced with a cybernetic attachment from the shoulder down. The appendage can transform for various needs such as a flamethrower, plasma cannon, or metallic claws. He can also shoot bombs from his shoulder.