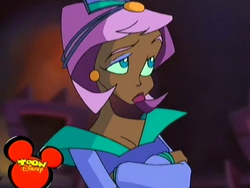 Vicki has tanned skin, pink hair, and the kind of body expected from a supermodel.

She wears a blue jumpsuit with green shoulder coverings and a green belt with a yellow planet-shaped buckle. In her hair, she wears a band with a multicoloured plume.

It was through her that Zurg learned that XR had all the knowledge of the Galactic Alliance, as the robot ranger phoned her during her date with the emperor. Vicki’s request for a date is ignored, now that Zurg acted on a chance to undermine his enemies.

She appears to be bored and aloof much of the time, and doesn't appreciate unsolicited calls, going so far as to keep her phone number unlisted. Zurg's scheming and XR's knowledge hold no interest to her, and she has no qualms about making this clear.

She is confident and direct when brushing off XR's advances, and shows no sign of fear around Zurg, despite his reputation as the evilest man in the galaxy. If anything, she finds him boring and would rather go out than watch him plot evil with Warp Darkmatter.