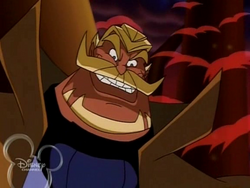 Biographical Information
Physical Description
Production Details
“It takes a man like me to tame your wild planet like this.”

Vartkes is a gas baron from the edge of the Galactic Fringe.

Possessing broad shoulders and an imposing height, Vartkes is not your average run-of-the-mill kingpin. He is well-built, easily dwarfing Buzz Lightyear. His most noticeable traits are his tanned skin and slicked back, platinum blond hair. He has a stylish goatee complete with complementing mustache and he wears decent clothing.

Not much is known about Vartkes other than the fact that he was a gas baron twenty years ago prior to the duration of the series. He harassed a mother and her son, Zoey and Myka, for their land and it took Buzz Lightyear to finally stop his bullying antics and put him behind bars.

Nothing else is revealed regarding Vartkes' current status in present time.

Suave, sophisticated and smooth, Vartkes is an underhanded ring leader you won't want to mess with. Beneath his cool and calm exterior lies a venomous snake, and he's out to constrict as many people as he can. He's willing to do anything to keep in business and extortion is not below his means of success. A slippery devil, and a smug and charming one at that.

Besides smooth talking, a corrupting influence and a strong frame, Vartkes appears to be an average human.

Retrieved from "https://blosc.fandom.com/wiki/Vartkes?oldid=26245"
Community content is available under CC-BY-SA unless otherwise noted.