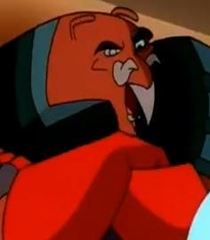 Varg is a Raenok bounty hunter.

Varg is a large Raenok (taller than Booster, as shown in Downloaded) with reddish skin and a single pair of external tusks/facial spikes. Like other Raenoks, he has a projecting snout with a beak-like upper jaw and exposed teeth on the lower jaw, four-fingered clawed hands, and three-toed feet. Unlike some others of his species he has dark eyebrows and no facial hair. He is readily distinguishable from other Raenoks by one pale, presumably blind eye. In at least some episodes he has darker red markings around one or both eyes.[1][2] Varg's usual outfit consists of a dark suit of armor with a gear-like toothed ridge on the left shoulder and red gloves with either external claws or no fingertips so that his claws are exposed.

Varg's first appearance in Downloaded depicts him as an unnamed, inarticulate bounty hunter looking to capture XR for Zurg.[1] Later episodes show him to be the supreme commander of the Raenoks, a barbaric race of large tusked aliens from the planet of the same name. He and some of his followers are taken into custody by Team Lightyear after their attempt to steal the secrets of of the Bathyosian defense system during a peace conference are discovered.[3] He later escapes during an attempted prisoner exchange and returns to Raenok using XR as a hostage, only to eventually be beaten in gladiatorial single combat by Buzz Lightyear and his prisoners rescued in a large-scale attack by Star Command.[2] Whether he was re-incarcerated afterward is unknown.

Varg is known to have a reputation for being ruthless and manipulative. In truth, he is shown to have a less accurate description. He is not very intelligent, as he uses poor grammar and speaks in the third person.

He is apparently even more warlike than other Raenoks, as they are described as being in a "warmonger slump" after he is incarcerated.[2] While being powerful and skilled enough to hold off Team Lightyear single-handed[1], he is also not above using underhanded tactics to gain an advantage in either a one-on-one fight or war.[2][3]

Despite these character traits, he apparently cares deeply for his mother, and is quickly driven into a rage when she or his relationship with her is insulted.[2]

Retrieved from "https://blosc.fandom.com/wiki/Varg?oldid=26116"
Community content is available under CC-BY-SA unless otherwise noted.