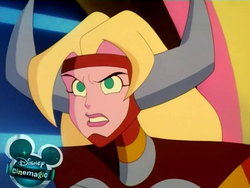 She was in charge of guarding XR when the Valkyrans captured him and 42, but Buzz and Mira tried to save them by disguising themselves as Valkyrans. The ruse would have worked if Buzz had not botched it up by saying his strange accent was due to him being from the south, because the guard snapped back with, "Liar! I am from the south!" Luckily for Buzz and Mira, Mira used her Tangean ghosting powers to influence her to leave. It was Mira's first and last time of ever "mind-controlling" someone.

Retrieved from "https://blosc.fandom.com/wiki/Valkyran_guard?oldid=24646"
Community content is available under CC-BY-SA unless otherwise noted.