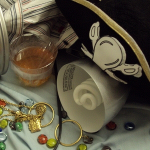 BLoSC fan from early on, but officially joined the fandom circa Second Generation. Continued on into the Third Generation under the username "Alexa" on the To Infinity and Fandom forum.

Likes lamps, hats, clocks. Writes in spare time; has plenty of original characters, some of which are used in role playing in the BLoSC Universe.

Retrieved from "https://blosc.fandom.com/wiki/User:Ab103?oldid=13817"
Community content is available under CC-BY-SA unless otherwise noted.