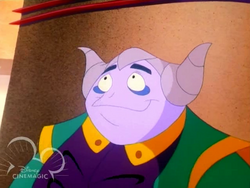 According to him, he is one of the largest Gargantians there are, possibly due to his wide girth.

Ursona Major reached out to the Galactic Alliance to request membership for his home planet of Gargantia. The Gargantian Militant Movement attempts his assassination to keep Gargantia from joining the Galactic Alliance. During this time, he openly befriended Space Rangers Buzz Lightyear and Booster Munchapper.

Amiable but self-serving, Ursona Major frequently seeks to improve the quality of life on his home planet by establishing interplanetary relations with the Galactic Alliance. In truth, most of Major's efforts are for his own personal gain, seeking comforts and indulgences he claims cannot be found on Gargantia.

Retrieved from "https://blosc.fandom.com/wiki/Ursona_Major?oldid=24858"
Community content is available under CC-BY-SA unless otherwise noted.