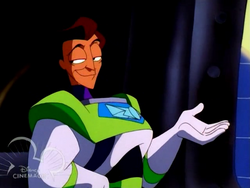 Prior to the series, it is only hinted in passing that Ty Parsec has had previous history with Buzz Lightyear; the latter being the one always rescuing Ty from distress or danger. Because of this, Ty resented being in Buzz’s shadow.

It is not shown or elaborated as to how Ty became a Space Ranger, but the first time he is shown in the series has him stationed out on Canis Lunis where he guards a research facility.

After a fateful encounter with the energy vampire, NOS-4-A2, however, his fate takes a slightly more dark, and fang-filled path. He becomes very crucial during NOS-4-A2's plot to turn the entire galaxy into wirewolves thanks to his unique mutation when bathed in radioactive moon glow.

He almost lost his job as a Space Ranger due to being a security threat, but he is seen keeping it in the end after NOS-4-A2's defeat and demise.

Tired of being in Buzz Lightyear's shadow, Ty Parsec is understandably dismissive and cynical of the former's near-perfect success. He doesn't possess the ever-positive outlook as Buzz Lightyear does and Ty is prone to grumpy tones and sarcastic remarks. That said, the Space Ranger isn't a bad person however, and he performs his job to the best of his ability.

He is also shown to be courageous and selfless, putting the needs of others before himself. He displayed his selflessness when he warned Team Lightyear to leave Canis Lunis when he figured out he was the Wirewolf, and when he defended Commander Nebula from XL while he was unarmed and temporarily discharged from Star Command.