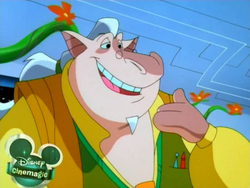 Triffid is a Rhizomian vega-genetic scientist. He is very prominent and influential in his field of expertise and may perhaps hold a high place in Rhizomian society.

Triffid, by appearance, is a stout Rhizomian who appears to be middle-aged. He dons a green and yellow outfit and small glasses. He also keeps his hair in a ponytail and seems to sport a white soul patch above his chin.

He was disappointed to find that Star Command was not receptive to his Vega-genetic science. However, he did not give up and instead suggested it as an alternative for dealing with NOS-4-A2, an energy vampire, to the Galactic President who took his suggestion and placed him in command of the mission.

This, in turn, caused him to take a leadership role. Through his leadership, he proved that he could be very assertive when he needs to be, but still remain the generally soft-spoken, calm, and wise professor he is today.

Retrieved from "https://blosc.fandom.com/wiki/Triffid?oldid=24478"
Community content is available under CC-BY-SA unless otherwise noted.