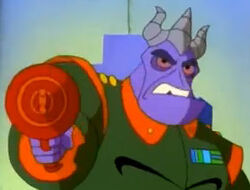 Standing at a few inches high, he is purple with three horns on his head. Despite his size, he appears to be well built.

Tremendor is a ruthless and cunning leader. He appears to be much more intelligent than his underlings, often using large words that confuse them, such as "autonomy" and "capricious". He tends to impatiently simplify his statements when they don't understand.

Retrieved from "https://blosc.fandom.com/wiki/Tremendor?oldid=25941"
Community content is available under CC-BY-SA unless otherwise noted.