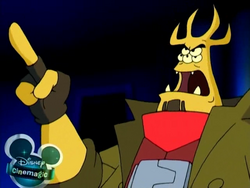 Torque is an abrasive, multi-eyed and multi-limbed convict with a number of crimes under his belt. After a run-in with the Evil Emperor Zurg he acquired cell-separating abilities that enable him to create clones of himself, making him an even more formidable foe against Team Lightyear.

Large and broad-shouldered, Torque is a male alien of an unknown species possessing four arms, five eyes and two legs. He has three thick fingers on each hand and frond-like appendages on the top of his head. He possesses strips of brown facial hair, just below his mouth, which might not even be hair. He is usually seen wearing his biker-like outfit, complete with red shirt and boots, and a long brown overcoat.

Torque's early history is unknown. What is known, however, is that he had multiple run-ins with Star Command that resulted in him being wanted in all 50 Sectors for charges of terrorism, arson, smuggling, and having unpaid parking tickets.

Shortly after the formation of Team Lightyear, Torque found himself getting arrested by the team of Space Rangers and is placed aboard a prison bus alongside other interstellar prisoners. Their transit, however, is interrupted by Zurg's hornets, who capture him and bring him to Planet Z, where Zurg experiments on him. This experimentation gives him the power to clone himself, and since then he has become an even more dangerous foe.

Torque is harsh, cunning, and traitorous, and behaves like a biker, frequently committing crimes and riding around on a futuristic motorcycle. His love of money is only rivaled by his love of causing chaos wherever he goes. Torque's speech is littered with faux terms of affection, such as referring to most people as "baby" or "honey".

The only people Torque seems to respect are his own clones, whom he treats with genuine courtesy and reverence.

Though Torque is skilled at brawling, he prefers to use firearms when on the job. Due to his four arms, he is able to wield four weapons at once. He is also skilled at operating vehicles as well, most frequently space-faring motorcycles.

After being freed from a prison transport by Zurg, the Grubs implanted a cell-separation device upon his chest, allowing him to self-replicate and produce countless identical clones. These clones, however, are unstable, and are easily destroyed by a single hit from any weapon hit.

Retrieved from "https://blosc.fandom.com/wiki/Torque?oldid=24980"
Community content is available under CC-BY-SA unless otherwise noted.