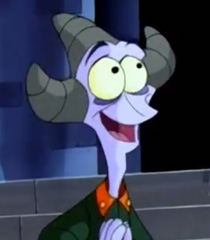 Little is known about Titanux other than he has served as Ursona Major's aide for quite some time.

Titanux has shown to be really loyal to ambassador Ursona Major, expressing great distress when the latter got kidnapped.

Initially, he was very eager to meet the Space Rangers, only to be horrified by just how big they are, and became fearful of them. However, after the Rangers saved the ambassador and protected him and the other citizens from the militants, his respect for them formed.

Retrieved from "https://blosc.fandom.com/wiki/Titanux?oldid=25939"
Community content is available under CC-BY-SA unless otherwise noted.