A rare element that has the power to change the days of the week around. It could also simply be a time-altering device. Zurg had it in his possession in the short comic "Monday, Monday" and turned Friday into Monday all across the galaxy, but it was snatched from his possession when XR and Buzz, thwarting his scheme.

The main power source in Buzz Lightyear of Star Command, crystallic fusion is primarily mined from the underwater caverns of the planet Bathyos. The crystal itself is shown to be a light shade of green and faceted.

Only Bathyos and the unnamed mining planetoid in "Shiv Katall" were seen to produce crystallic fusion crystals. 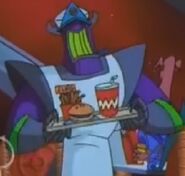 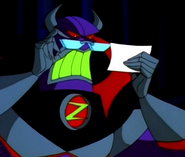 Add a photo to this gallery

Another rare element, this element has the power to alter everyone's behavior, making them act "backwards", as quoted by Buzz. Buzz apparently had a run-in with this element before, as stated in "The Foolium Effect!". Thanks to his quick thinking, everyone returned to normal.

Retrieved from "https://blosc.fandom.com/wiki/Technology?oldid=22833"
Community content is available under CC-BY-SA unless otherwise noted.