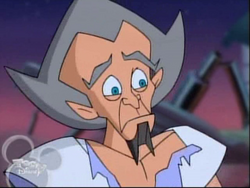 Spyro Lepton, also known as Spyro von Madman, is a scientist who formerly worked for Star Command and desired revenge on Buzz Lightyear.

In his human form, Spyro Lepton is of average height, and less muscular than most humans seen on the show. He wears a white shirt, purple gloves, and blue pants. His brown (later grey) hair is unusually styled, with two thin, upward-facing points on each side and one larger, flatter point in the middle. A dark beard which also comes down in two points adorns his chin, and he has a pair of dark, bushy eyebrows.

When in the form of a Cryborg, his features become hard and crystalline, and he is entirely green. His size also increases as he absorbs more power, turning him into a giant capable of stepping on cars and smashing through buildings.

Spyro Lepton once worked for Star Command as a scientist, and Buzz described him as a "visionary". However, at some point in his career, he came up with a proposal to turn Space Rangers into crystalline entities known as Cryborgs, which he thought would bring Zurg to his knees. However, Buzz Lightyear and Commander Nebula both shut down the project, believing it to be unethical.

Spyro's lab was locked up, but he broke in to prove the worth of his project by transforming himself into a Cryborg. Needing power, he then went to the fusion reactor and used its power to begin the crystallization process. Buzz arrived to stop him, and during the ensuing fight the bridge to the reactor collapsed, and Lepton plunged to his apparent death. Buzz searched for his body for days, but never found it.

The scientist was not dead, though, and was able to evade the sensors because they didn't recognize him in his Cryborg form. After that incident, he became obsessed with wreaking revenge on Buzz, and took his young daughter Bonnie to a secret lab where they spent ten years plotting Buzz's downfall. Finally, when Spyro's plan was ready to be enacted, Bonnie sent out a false distress signal and lured Buzz to the lab, where he was captured by Lepton. Spyro then strapped Buzz into his "Cold Slab of Revenge" and planned to crystallize his brain; however, Bonnie allowed Team Lightyear to enter and rescue their captain.

Spyro was then taken to a prison on Capital Planet, and in his anger at seeing his daughter go on a date with Buzz, he destroyed the television set in his cell. Seeing the electricity crackling from the broken device, he realized he could drain power from it, and used the power to increase his size and strength, allowing himself to escape the prison.

He went on a rampage through the city, kidnapping Bonnie and almost killing Buzz. Team Lightyear tried to stop him, but their efforts were of little use against his incredible power. Realizing her father had to be stopped, Bonnie struck the weak spot in his crystalline structure with a wrench, and he reverted to his former self. No longer under the influence of the crystals, he chose to use his research for good instead of evil.

When he had crystalline on his body, he could absorb energy to grow stronger and bigger. He can also multiply the power of the energy he absorbs 50 times.

Retrieved from "https://blosc.fandom.com/wiki/Spyro_Lepton?oldid=26395"
Community content is available under CC-BY-SA unless otherwise noted.