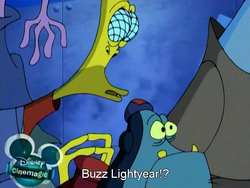 Smeego is a small-time crook who can be found on Tradeworld.

Not the most attractive thing under the sun, Smeego shares many traits with that of a common insect. His skin, or perhaps exoskeleton, is lime and around his mouth is an olive patch; possibly stubbles or 5:00 shadow. His eyes are aqua and multi-faceted, much like a fly, and underneath there are two obvious nasal cavities. Smeego is bald, thin, and frail.

There are wings upon his back, and he has multiple arms for a total of six limbs, like an insect.

Like most minor characters, Smeego's history is really unknown. What is known, though, is that he is a shady guy who has a penchant for fast-talking and panicky quirks. He can be seen several times either running from the law or getting caught. It is implied that he's been to prison at least once.

While not having much time in the show, Smeego is typically seen as a fidgeting, shaky individual. He speaks in a weak, timid voice and is mainly out for himself. Not someone you want to entrust your new cruiser to.

Nothing other than flight thanks to his insect-like wings.

Retrieved from "https://blosc.fandom.com/wiki/Smeego?oldid=24611"
Community content is available under CC-BY-SA unless otherwise noted.