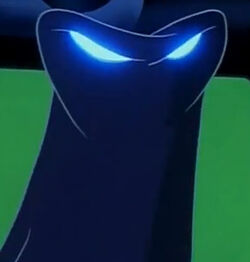 The Shape Stealer is a project made on Planet Z.

In its normal form, the Shape Stealer can be mistaken for an ordinary, dark blue blanket until it opens its glowing blue eyes. When it takes over someone's body, it seems to disappear, though its host's eyes may take on the same glowing hue as its standard form.

The Shape Stealer was created by Brain Pod 11 under the codename Project X. Zurg was originally unimpressed with it until it revealed itself by taking over one of Zurg's Grubs as a demonstration. From there, the Shape Stealer took over various people in an attempt to assassinate Buzz Lightyear. Eventually, it ended up on Star Command and took over Buzz himself. It was sent into space by Mira Nova. It is unknown where the Shape Stealer is now.

It is very loyal to Zurg and will stop at nothing to try to kill or take control of Buzz. The Shape Stealer is shown to be very destructive, violent and merciless. It even risked the lives of the passengers when it possessed the bus driver.

It can control anyone by enclosing them in its synthe-wrap from.

Retrieved from "https://blosc.fandom.com/wiki/Shape_Stealer?oldid=22564"
Community content is available under CC-BY-SA unless otherwise noted.