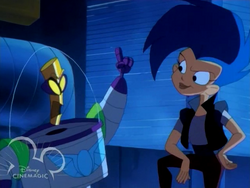 Savy SL2 is an orphaned human child living on Tradeworld with her two adoptive robot parents.

About the same height as XR, this fairly skinned girl sports a black vest over a white T-shirt, black pants and shoes. Savy's dark blue hair hangs in her face, but when she becomes a Ranger Scout, it's slicked back.

Not much is known about Savy's past, except that she was adopted by her robot parents. When they were attacked by NOS-4-A2, she decided to take matters into her own hands and go after him herself. She did so many times, but each attempt she tried, he escaped.

When Buzz Lightyear and XR came to Tradeworld looking for the energy vampire, they met Savy when she saved XR. If it were not for her, XR would have been shut off for good after he was attacked by NOS-4-A2.

With her help, they found the energy vampire underground in the sewers, and shut him down temporarily.

After joining the Ranger Scouts, her parents were brought back to life and she was reunited with them. What happened to them and to her after the events of NOS-4-A2 is a mystery.

Assertive and quick-thinking, Savy is a fighter to the core. She refuses to give up on her goals, no matter what she has to do to accomplish them. This can sometimes get her into trouble, as Savy will sometimes jump into situations without thinking ahead. Despite this, her determination is a very strong trait which she possesses.

Although she can be somewhat rude and cold to other humans most of the time, she is very kind and friendly to robots. She even shows sympathy for robots, especially when they are attacked by NOS-4-A2, due to her parents being attacked by the energy vampire. She's also very persuasive, as she persuaded Commander Nebula to buy cookies from her when she joined the Ranger Scouts.

For a young girl, Savy is extremely resourceful, having lived on Tradeworld for most, if not all, of her life. She is streetwise, knowing how to handle firearms like plazookas, hotwire hovercars, and resuscitate robots.

She's quite an excellent jumper as well, able to jump from a drain pipe down to the floor of NOS-4-A2's lair.

Retrieved from "https://blosc.fandom.com/wiki/Savy_SL2?oldid=24568"
Community content is available under CC-BY-SA unless otherwise noted.