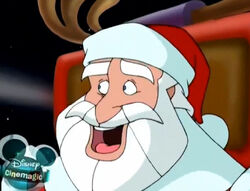 Biographical Information
Physical Description
Production Details
Santa Claus is a human who delivers gifts to people in the universe for the Holiday.

He is an overweight human male with a red and white costume with black boots. He has white hair and beard and wears a red hat with white trimming.

Santa is first seen working at a mall, where he soon talks to Buzz while revealing his identity as Santa but Buzz didn't believe him, thinking there was no such thing.

However, he catches up to Team Lightyear on Capital Planet and once more Buzz doesn't believe him while his crew regard him as crazy. Santa then proves his identity by listing an incident in Buzz's childhood involving a time where the latter hurt his pet cat Fluffy with a laser. Buzz is shocked to hear this, since nobody else knew of it. Santa then reveals that he did and Buzz learned the event is what caused him to not get his present at the age he lost his belief. Now fully convinced, Buzz offers to help him but he has to worry about Zurg, who strips Capital Planet of their Christmas decorations. Santa says Zurg's goal is to destroy Christmas.

Later on, Santa takes Buzz to his workshop and shows him how technologically advanced he became to do his job. He soon reveals that Zurg had broke in and stole his Chrono-Disrupter, the device that stops time and allows his deliveries to all in the universe. Santa's elves tell him that the replacement Chrono-Disrupter will be ready in a week, to his dismay. Santa decides to get the old one back and Buzz requests the outdated hyper-speed accelerator for his own purposes. Buzz contacts his team and tells them to meet him on Tradeworld.

On Tradeworld, Buzz formally introduces Santa to his team as they are at a loss (save a gleeful Booster) at discovering he's real. They then help him by making the planet more Christmas-themed as bait to draw Zurg in. Santa arms Buzz with an outdated hyper speed accelerator to battle Zurg, who is doing a crime spree. In the end, Zurg loses the time device but taunts Santa about being unable to deliver presents without stopping time. Santa is devastated and fears the worse.

He brings Team Lightyear to his shop and while they amuse themselves, he fears his record of flawless delivering to be in danger with the device. However, they have him show his old method and he reveals his old sleigh, which is powered by belief. After the sleigh is fully charged, Santa goes out on his delivery with Team Lightyear and they successfully save the holiday.

At his shop, he thanks Team Lightyear for their help and calls them excellent helpers.

He is known to be kind and jolly, giving presents to those who are nice. According to himself, his delivery record was flawless and he never messed up while appearing devastated at the possibility. He loves his job, as he gave a young girl her present and smiled as he did so.

However, he's no pushover; he can be upfront and straight to the point when he needs to, and has a wily side to his personality. He specifically told Buzz that he didn't give a present on the year he lost his belief because of an naughty incident in Buzz's childhood, how he focused on saving the holiday, and had the Space Rangers decorate a planet.

He is very intelligent, as he built hyper-speed and time-stopping devices to travel across space to deliver presents to everyone in the universe.

Retrieved from "https://blosc.fandom.com/wiki/Santa_Claus?oldid=25458"
Community content is available under CC-BY-SA unless otherwise noted.