Buzz Lightyear of Star Command Wiki
Register
Don't have an account?
Sign In
in: Characters, Individuals by unnamed species 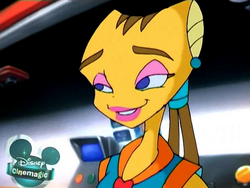 Sally is a waitress at Cosmo's Cosmic Diner.

From an unknown species of aliens, Sally is a yellow-skinned woman with multiple arms (four of them!) and four fingers on each hand, long, slender legs, and a nice physique. Her lips are a luscious pink and her eyelids match, bringing out the blue in her eyes. Her ears are vaguely cat-like in nature and she keeps her brown hair into a stylish ponytail.

Sally is only seen working at Cosmo's Cosmic Diner as the main waitress, and she has been in several episodes. In all of them she is servicing Team Lightyear as well as the diner's other patrons.

Kind and soft-toned, Sally is a pleasant person to have as your waitress and she is fairly proficient at her job. She sometimes flirts with Buzz Lightyear and seems rather fond of Team Lightyear in general.

Given she has four arms, she can carry multiple trays at once. She also has an impeccable memory, and can recite regular customers' usual orders with ease.