Buzz Lightyear of Star Command has a large array of robots. They can either be simple household objects, intelligent ship flyers, or deadly instruments of destruction. XR was reportedly the first robot to obtain a human-like personality with actual character flaws (even though XL, his predecessor, was nothing but character flaws), but most robots in the series depict similar personalities throughout the series.

The reason for this may be because XR was fitted with an AI chip that would allow him to learn from those around him. In contrast, the rest of the robots might simply be fitted with VI personality chips, with no hope of ever fully utilizing whatever they learn. They might even be prone to repeating the same mistakes and actions over and over again unless reprogrammed. However, all this is mere speculation as it was never explained in the series. 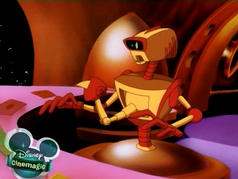 Auto-pilots are yellow-red robots that primarily handle flying cargo freighter ships. They are merged to the ship itself through a thick cable, and possess no legs. As cargo freighter fliers they navigate through space to reach their destinations, thus are the solitary individual on each ship. They maintain records of each individual cargo piece they transfer and an archive of all their past deliveries. They also carry black boxes with records of their ship's files contained in their chest cavities in case of an accident or malfunction. Their personalities can be just as diverse as any other robot's, as depicted by AP-99's sarcastic and ambitious personality in "NOS-4-A2".

Energy vampires are robotic vampires that feed on robots and machines for their electrical energy. They sleep in hi-tech coffins that are difficult to break into and they hate the taste of blood. Energy vampires possess amazing strength. Like a human or an alien, energy vampires have a heart, only it is called a servo-pump which pumps servo-fluid throughout their body.

They are incapable of speech besides for very basic words such as "Obey Zurg!" However, in the actual series itself, no Hornet has ever uttered a word.

Slam-Bots are fighting robots created by Compu-Klerm - Norbert Klerm's company - in an attempt to expand into the evil market. Based on his Smash and Slam video games, these tall red robots are well-armed and nearly unstoppable - but only with the right programming. The original model was too slow, so Klerm kidnapped Buzz Lightyear and downloaded his moves and tactical knowledge into the robots, creating the perfect fighting force.

At the end of "Mindwarp", the only episode to feature the Slam-Bots, Buzz downloads his co-worker Gil's personality into the robots, turning them into non-threatening, work-obsessed office employees. They are last seen eating cake with Gil.

Vendbots are intelligent vending machine robots, first seen in the episode "The Slayer". Vendbots can range from newspaper vending robots to drink vending robots.
Retrieved from "https://blosc.fandom.com/wiki/Robots?oldid=16096"
Community content is available under CC-BY-SA unless otherwise noted.