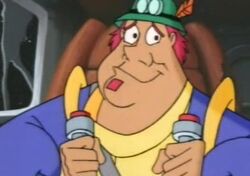 Rentwhistle Swack is an unscrupulous entrepreneur and conman who will do anything for money.

Swack is an overweight man with balding red hair and a cube-shaped beard. He most frequently appears wearing a blue and yellow suit with a green feathered cap.

Swack was next seen in "The Main Event" in the employ of technocrat Norbert Klerm, having arranged a battle on the surface on Sentilla VI for the latter's entertainment by spreading a fake story about a cargo ship full of V-Class Hyper Bombs. Although Swack's plan to lure Buzz Lightyear and intergalactic criminal Torque into the fray succeeds, his efforts also unintentionally attracts the attention of Evil Emperor Zurg. Terrified of the Emperor, Swack quickly attempts to flee, only to be halted and bribed into confidence by the overconfident Klerm, who declares his robots can provide enough challenge to keep them safe. Klerm's claims fail to hold up, with their ship soon assaulted by Zurg, who is less than pleased at their deception. Swack and Klerm are nearly killed during Zurg's attack, with the latter callously discarding Swack to save his own skin. Although Buzz manages to save both Swack and Klerm, Swack attacks his former employer in retaliation for putting him in danger, an act Buzz chooses not to stop.

Swack is next seen in "Downloaded", where Zurg has posted a galaxy-wide bounty for XR, who has the entirity of Space Command's computer systems and databanks stored in his head. Desperate to move back into Zurg's good graces after the events on Sintilla VI, Swack bribes the Grounders who have just captured XR for his bounty with double that of the bounty itself. The Grounders gladly relinquish XR to Swack for his offer, but Swack's efforts to escape with the robotic ranger fail once Team Lightyear boards his ship. While Swack attempts to cancel the check he handed to the Grounders, his ship is suddenly attacked and destroyed by Warp Darkmatter, though his life is saved by Mira.

Retrieved from "https://blosc.fandom.com/wiki/Rentwhistle_Swack?oldid=24922"
Community content is available under CC-BY-SA unless otherwise noted.