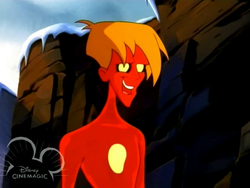 He has a red slim body and has a yellow spot on his chest which is his heart. He also has orange hair, a pointy chin, and yellow eyes.

He's a laid back teenager who has strong feelings for Petra.

Plasma Manipulation: He can generate and manipulate plasma in the form of electricity.

Size Manipulation: He can control his own size and mass.

Retrieved from "https://blosc.fandom.com/wiki/Plasma_boy?oldid=25167"
Community content is available under CC-BY-SA unless otherwise noted.