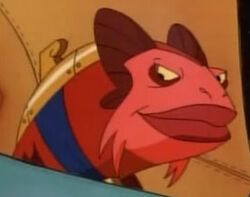 Panchax is a Bathyosian officer and the Chief of Security of the crystallic crystal mine on Bathyos.[1]

As a Bathyosian, he is a red fish-like alien with thick lips and two maroon fins above his yellow eyes as his "eyebrows".

Panchax is very strict and does not tolerate anyone helping him on his missions. He's also a bit short-tempered, as shown when he expressed annoyance at an expensive machine being broken by others. Like other members of his race, he does not bode well with air breathers, but unlike them, he's willing to give them a chance, as seen when he worked with Buzz and his team.

He is dedicated to his job, as he worked for months investigating Gularis and determined to bring him in. When Buzz unintentionally ruined his chances, he was angry but changed his perspective after Buzz helped him defeat his enemy.

However, he is not above giving respect when it is due, as he put aside his differences with Team Lightyear to take down a common enemy. He also gave Buzz and his team respect for helping to defeat Gularis and appreciated him saving his life and kept his offer of joining Star Command in mind. He is also informed that Buzz sent the missile somewhere else.

Panchax is a capable fighter, holding his own against several minions and defeating the shark-like Minister Gularis and eventually arresting him.

Retrieved from "https://blosc.fandom.com/wiki/Panchax?oldid=25257"
Community content is available under CC-BY-SA unless otherwise noted.