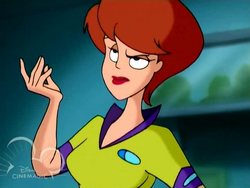 Dr. Ozma Furbanna is one of the most honored animal research scientists in the galaxy, currently having taken residence upon Karn to study its wildlife. She is also Buzz Lightyear's main love interest.

Not much is known about Ozma's origins. We only know that she is a renowned animal researcher, possessing at least two diplomas in the field, and that she herself requested to be stationed on Karn in order to observe and protect the animals there. Her sojourn on Karn is referred to as an assignment, which might hint at her not always having been stationed on Karn and the possibly of her being stationed elsewhere in the future. Star Command comes into contact with her every so often to receive updates on her status.

The Museum of Natural History, located on Capital Planet, houses an exhibit on Karn that features Ozma's ground-breaking work in the field. She is also considered to be the greatest living Karnian naturalist.[1]

The Beasts of Karn

Star Command had been trying to communicate with Ozma on Karn for three months, but to no avail. Team Lightyear is assigned to investigate, but due to a run-in with bat-like creatures they crash-land on Karn, instead. When Ozma initially runs into them, she mistakes them for poachers until Buzz tells her they are Space Rangers and introduces himself. Excusing herself, Ozma leads them to her encampment and allows them to stay for the night, despite not being exactly thrilled at having guests.

While Ozma is treating an animal's wound, none other than the Evil Emperor Zurg invades her home with a business proposition for her. She is initially suspicious and refuses to deal with him, but Zurg is sure that he will catch her interest.

She boards his dreadnaught and follows him to a cave on Olur 5, where Zurg has placed the nest of Millennial Bugs he stole from the Museum of Natural History. She is amazed and exhilarated at the same time, for the bugs are still alive in the eggs even though scientists believed the millennial bugs had gone extinct a thousand years ago, though she is still wary of Zurg's intentions. However, he goads her into believing that he has no real use for them and suggests that she is refusing merely because she doesn't want to upset Buzz.

Once Buzz and Booster reach the cave in Olur 5, they discover an entire nest of eggs. Buzz prepares to destroy them but is stopped by Zurg's forces and Ozma herself.

Buzz is shocked to see Ozma working with Zurg, but Ozma explains that Zurg is trying to save the eggs instead of attempting to exterminate a species like Buzz nearly did. She reveals that through Zurg's help, they would have never discovered that the millennial bugs hatched once every thousand years. Buzz reminds her that the millennial bugs decimated an entire planet a millennium ago, but Ozma is determined to protect them at all costs and they end up attacking each other while the eggs start hatching.

This is all, naturally, in accordance with Zurg's plan. As the bugs hatch, his Hornets ferry them to a freighter. Ozma is furious once she realizes Zurg tricked her and reminds him that he promised the bugs would live in peace. Zurg planned on unleashing the millennial bugs upon Capital Planet all along and leaves them trapped in the cave. As Ozma, Buzz and Booster attempt to fend off the remaining millennial bugs, Ozma tells Buzz it's impossible to hurt them due to their invulnerability. However, by pure chance, they discover that the bugs' underbellies are ticklish and relay this

information to the rest of the Space Rangers fighting off the millennial bugs on Capital Planet, successfully thwarting Zurg's plan.

Although Buzz would rather destroy the millennial bugs, he agrees that isolating them on a remote planetoid so they can live our their lives is better, submitting to Ozma's wishes, and Ozma thanks Buzz for being so considerate with a kiss, finally asking him to call her by her first name.

As Team Lightyear is informed that Madame President's ship crashed on Karn, pursued by Zurg, they go to follow Mira in protecting the President and Smoltz, trusting in Ozma's help in dealing with the animals on the planet.

Ozma has a no-nonsense kind of personality. She initially appears to be cold and aloof, but she speaks quite passionately about Karn and its wildlife. As a result, she hates poachers and would not hesitate to resort to violence if the lives of Karn's animals are in danger.

She has a sarcastic streak about her that is often mistaken for hostility. She does not go out of her way to crack jokes or be humorous, but she is amused when people are flustered and surprised about Karn's habitats.

She can be vicious when necessary, yet coolly polite despite being abrupt.

Despite her hourglass figure, romance is the last thing on her mind. Even when she and Buzz start to get closer, either something he says or his actions can put her off. She is at first unimpressed with him and his self-centered attitude, and acts sarcastic towards him, but slowly starts warming up to him. She admires how Buzz never gives up in a struggle.

Simply because she is anti-social and mistrusts sentient beings does not make Ozma an insensitive person.

Ozma's job is a demanding one, hence she has to be both physically strong and quick on her feet. She can maneuver in her heavy armor with ease, doing backflips to avoid enemies, attacks, etc.

The Beasts of Karn