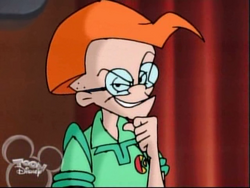 Biographical Information
Physical Description
Production Details
“Oh, did I forget to mention we've gone into mass production and are ready for mass destruction?”

Norbert Klerm is the self-proclaimed "richest man in the galaxy",[1] and Space Rangers consider him to be its "evillest technocrat".[2] He is also the founder and owner of Compu-Klerm.

He has reddish-orange hair and beige skin. He also has a high-pitched, nasal voice, and tends to laugh and snort in an odd manner.

He made a video game that was a huge success called "Smash and Slam".

After the huge success of his next video game, "Smash and Slam", Klerm was eager to expand into the evil market because of the financial opportunities. He presented a few villains life-sized versions of the Slam-Bots featured in his game, but they weren't impressed because it was very slow, and pointed out that it wouldn't be able to stand a chance against a Space Ranger. This gave Klerm the idea to capture Buzz Lightyear in order to download his thoughts into his Slam-Bots, reprogramming their moves to imitate Buzz's.

Eager to see the results, he afterwards sent a Slam-Bot to Star Command to test it out against Booster, Mira and XR, but became angered when he saw it was losing against them. Miss Harper pointed out that they still needed to download more information from Buzz's brain and that its current losing streak is because he had been too impatient to try it out. Klerm pulls the Slam-Bot back, but the three rookies go to Compu-Klerm to find out what he's up to.

At Compu-Klerm, they find Buzz brainwashed into believing he is an employee for Klerm named Flip Faxtoner, who deems it an honor to have his boss "pick his brain" every now and again. The rookies realize this is how Klerm got his Slam-Bots to imitate ranger training and decide to take Buzz back to Star Command so the LGMs can help him. But Klerm sends another Slam-Bot after them and they are hard-pressed, but with Buzz's help as he slowly begins to remember things, they manage to escape.

However, they end up in a warehouse with hundreds more Slam-Bots. Klerm confronts them again and orders the Slam-Bots to attack. When Mira is backed into a corner and nearly cut in half by a Slam-Bot's sawblade, Buzz finally remembers who he is and beats the Slam-Bot away. However, he and the others get backed into a corner, and Klerm taunts him saying that they've lost against him. Buzz admits defeat and retreats, leaping out of a hole in the wall and leaving the others in the warehouse.

Klerm is initially elated that he's won against Buzz and orders his Slam-Bots to finish off the rookies. But Buzz had a plan all along and uses the brain-picking device on Gil to download the employee's knowledge into the Slam-Bots, causing them to stop attacking and start performing calculations instead. Buzz confronts Klerm, ready to take him in, but Klerm manages to escapes in a shuttle.

Although he is never seen in another episode, Compu-Klerm still exists. Therefore, it is safe to assume that Klerm probably cleared his name in some way or other and continues profitting from his company.

He is very intelligent but childish.

Retrieved from "https://blosc.fandom.com/wiki/Norbert_Klerm?oldid=22025"
Community content is available under CC-BY-SA unless otherwise noted.