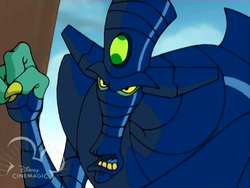 Biographical Information
Physical Description
Powers and Abilities
Production Details
“I am your blighted past. I am your anguished future. I am Natron.”

Natron is an evil ruler who ruled the galaxy thousands of years ago until he was overthrown and entombed on his homeworld Planet X by The Protector. When exploring LGMs and Warp Darkmatter accidentally break him free, he attempts to take over the galaxy again but is thwarted by the combined efforts of Warp and Team Lightyear, who entomb him again.

Natron has aquamarine skin, but is swathed in blue bandages for much of the episode. His eyes are yellow, and he is taller than many other beings. He seems to have somewhat of an animal resemblance to an aardvark.

When Natron was defeated and entombed by the Protector, he vowed that he would return and once again rule the universe.

Natron is bent on domination of the galaxy and destruction of all those who oppose his will.

He has a variety of devices at his disposal, but most do the same thing - that is, freeze people in time. The freezing is directly linked to Natron, as demonstrated by the fact the bubbles of frozen time vanished when he was drained of his power.

Retrieved from "https://blosc.fandom.com/wiki/Natron?oldid=24640"
Community content is available under CC-BY-SA unless otherwise noted.