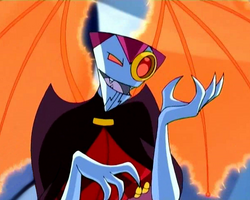 Biographical Information
Physical Description
Relationships
Powers and Abilities
Production Details
Image Gallery (10)
“I am your doom. I am NOS-4-A2.”
NOS-4-A2 was a robotic energy vampire originally created by the Evil Emperor Zurg to take over Star Command. Over time, he became one of Team Lightyear's main adversaries. After a failed attempt to take over Planet Z, NOS-4-A2 was ultimately defeated and destroyed by Ty Parsec in his wirewolf form.

Lithe and slender, NOS-4-A2's design resembles that of a typical vampire. His body is composed of sharp corners; pointed shoulders, taloned claws, and a body that ends in a sharp point. His head, resembling an upside-down triangle, sports a simple orange-colored right optic and a monocle-shaped left optic. His tongue is long and occasionally ends in a forked tip, and he possesses four fangs that are similar to drills to feed with.

Like most robots, NOS-4-A2 "bleeds" servo-fluids, has a servo-pump for his "heart", and a motherboard for his "brain".[1]

NOS-4-A2 was created in a lab on Planet Z by Zurg. Programming him to be swift, destructive and undefeatable, Zurg also provided the robot with plenty of information on Buzz Lightyear as part of the Evil Emperor's plot to take over Star Command. By hiring a cargo ship, Zurg disguised NOS-4-A2 as a piece of cargo that Team Lightyear inadvertently salvaged when Warp Darkmatter attacked the cargo ship. On the journey back to Star Command, however, when XR was given the task of checking up on the cargo, NOS-4-A2 emerged from his coffin and attacked him, leaving the ranger with two small bite marks on the side of his chassis, but no memory of the encounter.

Afterward, once NOS-4-A2's coffin had been examined by the LGMs and left in Star Command's science bay with XR in sleep-mode nearby, the vampire emerged and set off to work. Waking XR, he ordered him to release him from the force-field protecting his coffin. Due to NOS-4-A2's having bitten him previously, XR was under his control. Once free, NOS-4-A2 carried out his main directive of taking over Star Command. With a few clever ruses he successfully led all Space Rangers away from the station. Unfortunately for him, thanks to a poor choice of words while disguising his voice to sound like Commander Nebula, Buzz and Mira realized something was amiss, returned, and encountered NOS-4-A2 for the first time.

In the ensuing fight, NOS-4-A2 calls upon the help of the mind-controlled XR, whom he has dubbed "Little One", to attack them. Buzz and Mira escape and try to come up with a plan while NOS-4-A2 works to use the entire station against them. The energy vampire eventually catches up with Buzz, and the two engage in combat. In the midst of the fight, Booster catches up with XR and reminds him that he is a Space Ranger, not the slave of an energy vampire. Snapping back to his senses, XR drains NOS-4-A2's energy, powering him down.[2]

After being imprisoned on PC-7 for an undisclosed amount of time, NOS-4-A2 escaped to Tradeworld where he became notorious for preying on hapless robots, such as vendbots. One such case incited the rage of the young Savy SL2, who made it her goal to take NOS-4-A2 down in revenge for draining her robotic parents. But when Buzz and XR got involved, NOS-4-A2 shifted his focus to the robot Ranger, desiring revenge for XR putting him away. XR attempted to use his original method of powering the energy vampire down but failed, due to NOS-4-A2 having installed a randometer in his power grid. Savy's re-involvement saved XR from NOS-4-A2's clutches, but the vampire escaped into the sewers.

Buzz, XR and Savy pursued him, discovering his lair and miniature shuttle that resembled a larger version of NOS-4-A2's coffin. Buzz discovered NOS-4-A2 was going after the new crystallic fusion reactor due to go online that evening and decided to intercept him there. When Buzz and XR get ready to attack, Savy does so first, leaving her vulnerable to the vampire's attack. Buzz saves her, but NOS-4-A2 drains his suit, leaving Buzz powerless as he snatches up XR and returns to his lair. Buzz and Savy once again pursue, interrupting NOS-4-A2 as he details how he will drain XR within an inch of his life and recharge him to do it all over again as his form of revenge. To stop Buzz, NOS-4-A2 reanimates the dead robots and orders them to attack him. While Buzz is occupied and the vampire attempts to make his escape with XR, Savy drives a specialized draining unit through NOS-4-A2's randometer and drains him of all his power, saving XR and Buzz.

NOS-4-A2 made his way to the planet Canis Lunis by unknown means, and drew Star Command's attention by his attacks on the machinery there. A confrontation with Team Lightyear and resident Space Ranger Ty Parsec led NOS-4-A2 to bit Ty, an act that thoroughly repulsed him given Ty's organic state. However, the bite and the radiation from Canis Lunis' moon resulted in Ty undergoing a monstrous transformation into Wirewolf, a robotic werewolf creature. Team Lightyear destroyed the moon, but NOS-4-A2 was seen acquiring a small fragment, apparently with designs on its properties.

NOS-4-A2 goes against Buzz Lightyear's crew, but is ultimately defeated as a result of the crew wearing Professor Triffid's organic suits made using vega-genetic technology. Because the suits did not use electricity, NOS-4-A2 was unable to drain their energy.

Having formed an alliance with XL, NOS-4-A2 infiltrates Star Command at the time of Ty Parsec's trial, and uses the fragment of Canis Lunis' moon to transform him into Wirewolf yet again. Using his evil abilities to control Wirewolf, he leads the trio to Planet Z, where they manage to oust Zurg after NOS-4-A2 transforms many of Zurg's Hornets into vampire Hornets. XL then constructs a ray that transforms those exposed to it into Wirewolves, with the intent being that all organic life in the universe will be converted into a robotic food supply for NOS-4-A2. However, after leaving to hunt down Buzz and XR, who remain in their normal forms, XL is made to see that NOS-4-A2 will eventually consume him as well. The unlikely trio then attack NOS-4-A2, freeing the original Wirewolf in the process. In the ensuing conflict, NOS-4-A2 is impaled on the Wirewolf ray and then caught in the explosion of Zurg's lair, resulting in his apparent demise.

NOS-4-A2 is arrogant; even more arrogant than Zurg. He was created and programmed to destroy Buzz Lightyear and Star Command, defeat not being in his programming. He flaunts his position and power, employs the use of minions to do his bidding, and after his first "failure" becomes his own villain, no longer taking orders from Zurg.

He seems to be vengeful, as he goes out of his way to try and get revenge on XR, and obviously planned it out carefully (as he planned on slowly draining XR so he could feel all of it, and then recharge him and do it all over again).

Unlike Zurg, he seems more serious with what he does. However, like Zurg, he enjoys being evil, and seems to enjoy conquest, as he decides to take over Planet Z, Zurg's domain, and then use Planet Z as his base of operations to take over the rest of the universe. However, almost all of his schemes revolve around NOS-4-A2 feeding himself.

He seems to enjoy draining energy from various machines, having no sense of remorse or pity for those he drains. He also seems to like to try sapping new energy sources, such as power generators, or the energy from the high-tech appliance delivered to Cosmo's Cosmic Diner, which harnessed an unnamed "new energy source" that seemed to hold a lot of power. However, he doesn't seem to enjoy draining batteries, and usually will only do so to feed himself until he can find a better food source.

Energy Absorption: NOS-4-A2 can drain energy from robots, machines, weapons, environmental suits, and if no other source is available, batteries. Energy is his sole source of food, and serves to strengthen him. As long as his target is in close proximity, he can absorb its energy and even disintegrate weapons. However, in order to drain a machine, he has to bite it.

Energy Blasts: NOS-4-A2 can fire beams of blue energy from his hands and his mouth to attack his opponents and control machines. They can temporarily stun a target.[2]

Finger Rays: Although never used in battle, NOS-4-A2's fingers have been shown to be able to peel back and emit a fiery-hot beam similar to a blowtorch that can heat up and even melt some metals given time.

Flight: Possessing no feet or wheels, NOS-4-A2 moves around by hovering a few inches above the ground. For long-distance travels or heights more than a few meters, he uses his wings instead. His wing's skeletal structure consists of red spines, the wing itself being made up of red-orange-colored energy when in use.

Mind Control: By biting a robot or a machine (or using energy on machines or robots he has already bitten) NOS-4-A2 can simultaneously drain it and hack into its systems, installing a mind control program that enables him to command it in any way he pleases.

Monocle: NOS-4-A2's left eye serves more of a purpose than a simple eye. Emitting a beam of red light, NOS-4-A2 can hypnotize robots and apply a similar type of mind control (though with limited duration) as with his bites.

Randometer: NOS-4-A2 had once installed a randometer in his power grid to prevent others, like XR and Savy SL2, from draining him dry. Instead, it sends a current of energy as backlash to the opponent. However, the randometer was destroyed when Savy impaled NOS-4-A2 in the chest with her specialized power absorption unit.[1]