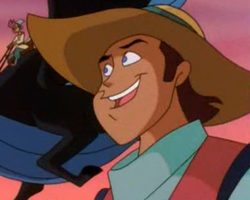 Myka is short, full of life, and all around innocent. He has dark brown hair and blue eyes like his mother. He smiles with a wide set of white teeth. His most recognizeable feature is his wide-brimmed hat.

When he grows older twenty years into present time, Myka is seen to have grown into a young man, though he still resembles his younger self.

Myka is only seen in the episode Lone Wolf, where he and his mother, Zoey, live on a far-off world. Together they harvest gas with their puffers, and thankfully Buzz Lightyear fatefully landed when he did. The local gas baron, Vartkes, was extorting the locals at the time for their land and increased profits and Myka and his mother were threatened and harassed by some of Vartkes' thugs. Vartkes was ultimately defeated by Lightyear with help from Myka and Zoey.

Twenty years into the present, Myka is seen to be a fine young man who helps his mother with the family business of mining gas.

A spunky young thing, Myka has the youth and tenacity of a child. He is optimistic, bright, and generally looking on the more positive side of life. He does show more serious emotions, however, when Buzz Lightyear doesn't believe in himself, prompting a harsh reaction on Myka's part.

Loyal and good-natured, Myka portrays innocence and kind will.

Retrieved from "https://blosc.fandom.com/wiki/Myka?oldid=25948"
Community content is available under CC-BY-SA unless otherwise noted.