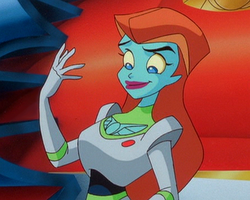 Biographical Information
Physical Description
Relationships
Powers and Abilities
Production Details
“You saved my planet once. Sir, what you did for my people, it inspired me to join.” — Mira to Buzz

Princess Mira Nova isn't your typical princess. She is hot-headed, impulsive, and desperate to be on the front lines rather than sitting on a throne. Unlike other Tangeans, Mira is perfectly comfortable interacting with other races, lacking the elitist attitudes shared by the rest of her people. Although humble, she can at times be arrogant and cocky, often times clashing with Buzz, her captain. She can be impatient, and has a tendency to fall into long strings of stream-of-conscious babbling; a habit throughout the series.

Despite these shortcomings, she is a good friend and strong fighter to her team. She is an excellent shot, and along with that hard head, she won't quit until given the order. She is also confident in her abilities, although a little careless at times. As a Space Ranger, she doesn't like to be called "princess", preferring to be acknowledged as a person rather than royalty. Mira is also a very stubborn individual, sometimes deliberately ignoring advice and orders given by others.[1] This is largely due to constant clashings with her own people's elitist attitudes, especially her father, King Nova.

"Guys, we're supposed to be on vacation!"