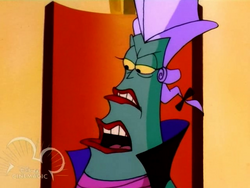 Madame President (as her title suggests) is the president of the Galactic Alliance.

She is of an unknown species of alien with teal skin and yellow eyes. Her lavender hair is statuesque, she has two mouths, and is short and stocky.

Her history before her election to the Presidency is unknown. She currently heads the Galactic Alliance, and is a staunch supporter of Star Command and a proponent of the Space Rangers.

Madame President takes a straightforward, no-nonsense approach to key issues, and does very little in the area of political maneuvering. She states the facts as she sees them, and brooks no beating around the bush. She has a tendency to shout and can be overbearing at times, but is generally a fair-minded and intelligent leader.

Members of Madame President's species have the ability to speak with either mouth, either alternately or simultaneously in unison, which they use for yelling and adding emphasis to their words.

War and Peace and War

Retrieved from "https://blosc.fandom.com/wiki/Madame_President?oldid=25841"
Community content is available under CC-BY-SA unless otherwise noted.