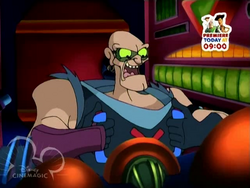 He is bald, has tan skin, and wears a navy blue outfit and green goggles.

At Tradeworld, Lardak was running a counterfeit scam until he got found out by Team Lightyear. Following a short chase around the planet, he was finally caught and the Space Rangers took Lardak back to Star Cruiser 42.

When Lardak angrily demands to be released, he and the Rangers witness the first demonstration of Zurg's Planet Destroyer. After witnessing the "destruction" of Tradeworld, Lardak thanked the Rangers for saving his life by arresting him and hurriedly begged to be sent to a nice, safe prison.

Lardak was in a high speed chase, running away from Team Lightyear. Just when he thought he gave them the slip, Mira appeared before him and arrested him, having used her Tangean ghost abilities to infiltrate his ship.

Lardak's next appearance was back on Tradeworld where he was once again being chased by the Space Rangers. Buzz arrived to back up his team to capture the criminal. Before he could be escorted away, the Shape Stealer attacked Buzz. It's left unknown if Lardak escaped the Space Rangers following the scuffle or was sent back to prison.

He was one of the many bounty hunters that went after Booster following Keno Kentrix placing a huge bounty on his head. He tried many attempts to kill Booster, including poisoning the complimentary fruits in his room.

When Team Lightyear fought off the criminals, Lardak tried to attack Mira from behind only to get knocked out by her.

Retrieved from "https://blosc.fandom.com/wiki/Lardak_Lurdak?oldid=25981"
Community content is available under CC-BY-SA unless otherwise noted.