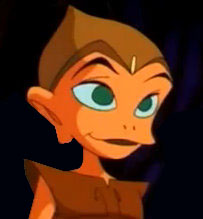 The Krnozian is the last of his tribe after a 900-year-long war with the Beletors.

He has orange skin, brown lips, and green eyes. He wears brown clothing and a chestnut hat on his head.

At some point in time, the Krnozian had been infected by the parasite, much like what happened to his people, turning him hateful and violent and causing him to declare war against the Beletors. The 900-year-long war, caused by the parasites, culminated in the near extinction of the Beletors and Krnozians, leaving one member of each species as the sole survivors.

When Team Lightyear crashed onto the planet, the Krnozian thought the Space Rangers were Beletors and attacked Mira and XR. After learning that they are not his enemies, the Krnozian told the two Rangers about his struggles and convinced them to help end this war.

A final battle took place with the Krnozian being nearly killed until Team Lightyear realized the insanity of the situation and tried to stop the Beletor from eliminating him. The Krnozian was removed from his suit but that didn't stop him from trying to attack the Beletor, only to be stopped by XR, who fired ice cubes at him. Unbeknownst to all parties, the cold from the ice removed the parasite from the Krnozian.

With the parasites seemingly extinct, the Krnozian and the Beletor, who also had her parasite removed, lived together in peace.

He gets superstrength and great hand to hand combat from his robotic armor. But he does not have any special abilities without it.

Retrieved from "https://blosc.fandom.com/wiki/Krnozian?oldid=26242"
Community content is available under CC-BY-SA unless otherwise noted.