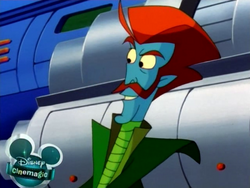 King Nova is Mira's father, and the Sovereign King of Tangea.

King Nova is a Tangean Royal, and has blue skin and black eyes. He has red hair and two long sideburns that merge to form a moustache underneath his bent nose. Like most Tangeans, he has a long neck.

He is usually seen wearing the same green suit and cane, possibly a sign of his stature as King of Tangea. In times of battle or adventure, he has donned a space suit modeled after Medieval European armor.

Like all Tangeans, with the exception of his daughter, King Nova holds a very elitist attitude, holding his species as superior over all other races in the Galaxy. He is prone to using insulting nicknames to refer to other species, such as referring to humans as "monkeys". Despite his air of superiority, King Nova is not above admitting his mistakes when proven wrong, and can be reasoned with.

His relationship with his daughter, Mira Nova, is best described as tumultulous. He strongly disapproves of his daughter's wishes to join Star Command, feeling such an organization is beneath a Tangean Royal. In truth, most of this disapproval stems from his concern over her wellbeing. Many of King Nova's decisions and arguments with Mira are ultimately revealed to be a father trying to help his daughter avoid the same mistakes he had made in the past.

Retrieved from "https://blosc.fandom.com/wiki/King_Nova?oldid=26584"
Community content is available under CC-BY-SA unless otherwise noted.