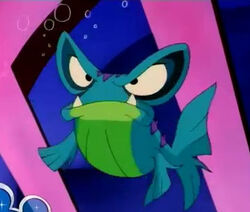 He is Bathyosian and looks like a blue fish.

Being a Bathyosian, he can naturally breathe underwater. When in his machine, he is capable of handling a firearm.

Retrieved from "https://blosc.fandom.com/wiki/Keno_Kentrix?oldid=24636"
Community content is available under CC-BY-SA unless otherwise noted.