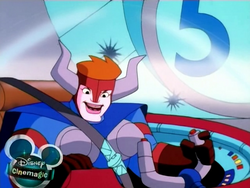 Although not given much of a personality, Hilda follows Brun without question and is one of her seconds-in-command along with Sig. She is just as warlike as the rest of the Valkyrans and is shown to be disappointed once at being denied a battle when they come across the remains of Starcruiser 5.5, though still very enthusiastic about stripping it down for parts.

She uses a mace-like bludgeoning weapon when in close combat. The staff can elongate so she can fire off rays for ranged fighting. When flying, her ship is a distinct blue color to match her clothing.

Retrieved from "https://blosc.fandom.com/wiki/Hilda?oldid=24485"
Community content is available under CC-BY-SA unless otherwise noted.