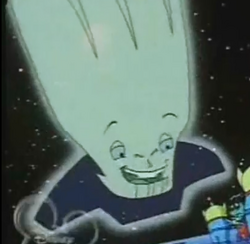 Guzelian is a humanoid alien from another galaxy.

Guzelian is a Heed, a species of alien with the intent on conquering the galaxy. His plan was to use a giant holographic projection of a floating head to persuade the Galactic Alliance and Planet Z that he was a Super Being and that the time for peace has come.

He was tricked into revealing his plan to the galaxy by Buzz Lightyear, who was working with Evil Emperor Zurg to stop Guzelian.

He might appear to love bringing peace to the galaxy but he actually wants to conquer the whole galaxy with his army as soon as the galaxy has dismantled their weapons and defenses.

Retrieved from "https://blosc.fandom.com/wiki/Guzelian?oldid=24480"
Community content is available under CC-BY-SA unless otherwise noted.