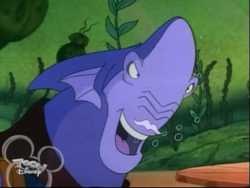 Gularis is a Bathyosian minister, a dignitary in the Bathyosian government doubling as the leader of a terrorist group to get rid of all "air-breathers" living on the planet. However, his plan to turn Capital Planet into another water world was thwarted by the combined efforts of Panchax and Buzz Lightyear.[1]

He is a blue shark-like Bathyosian with gills on his nose and a small white mustache. He carries a pair of mechanical arms.

At some point in his life, Gularis became the leader of the Bathyosian Council. However, he also became the leader of a secret terrorist group known as "Bathyosians Against Air-Breathers" that sabotaged the Bathyosian mining operation in an attempt to drive air-breathers off their world. Gularis believes that the air-breathers are ravaging Bathyos through the crystal mining, and wished to strike back against them.

When Team Lightyear came to Bathyos to investigate the sabotage, Gularis had his subordinate Blackfin rig an excavator to attack them; however, the attempt on the rangers' lives was ultimately unsuccessful. He then spoke with Buzz and successfully diverted suspicion onto the innocent Panchax, head of the mining security and detective investigating him.

Eventually, Panchax caught him in the act but Buzz foiled it and was captured by Gularis who revealed his true nature. Having the rangers and officer captive, Gularis revealed his plan to send a Hydro-bomb (a weapon capable of converting all the oxygen on a world to water) to Capital Planet.

With the help of his team and Panchax, Buzz thwarted Gularis' plan by sending the missile to Zurg’s planet while Panchax defeated the former dignitary.

Gularis was arrested and is now presumably in jail.

While giving off the appearance of a professional dignitary, he is revealed to be a duplicitous being bearing hatred for air breathers.

Gularis' prejudice towards air breathers is so strong that he formed a large militia to aid him in destroying the dome of the air breathers on the planet and using a missile to nearly drown Capital Planet.

Retrieved from "https://blosc.fandom.com/wiki/Gularis?oldid=25184"
Community content is available under CC-BY-SA unless otherwise noted.