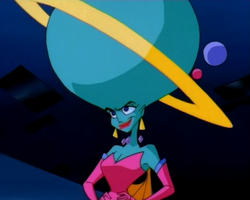 Biographical Information
Physical Description
Powers and Abilities
Production Details
“I am Gravitina. The mistress of mass and all of its attraction.”

Gravitina is a tyrannical despot who possesses gravatomic abilities,[1][2] which enable her to manipulate gravitational forces at will.

Having turquoise and blue eyes, Gravitina is an attractive woman who isn't afraid to flaunt her assets with her eye-catching wardrobe. She is typically seen wearing a pink bodice with matching high heels and gloves. A cape accents her outfit, and she wears a gem necklace that floats around her neck.

Gravitina's most prominent physical trait, however, is her abnormally large cranium. It is almost reminiscent of a planet, given it has its own "planetary ring" and three floating spherical objects reminiscent of tiny moons that circle it. It is a source of much ridicule for her, given most beings openly mock her for it.

All that is known is that during her youth, she didn't have a good prom experience.

Gravitina is oftentimes petty and self-absorbed. However, deep down, she desires companionship and love. Her abnormally large head was always a source of derision, leading her to live a life of crime.

Gravity Manipulation: Due to her abnormally large head, she is able to control gravity, even to the point of causing sunquakes and asteroid attacks upon celestial bodies. She can use gravity to make her enemies levitate in any direction she desires.

Retrieved from "https://blosc.fandom.com/wiki/Gravitina?oldid=21990"
Community content is available under CC-BY-SA unless otherwise noted.