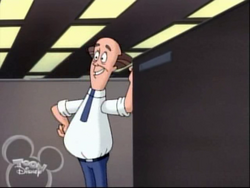 Biographical Information
Physical Description
Production Details
“From one middle manager to another let me tell you... delegate!”

Gil is an employee at Compu-Klerm.

Gil is a somewhat-overweight human male who wears a white shirt, blue pants and tie. He has brown hair on the sides of his bald crown.

Gil is a middle manager at Compu-Klerm constantly hoping for a promotion. He became Buzz's cubicle neighbor after the space ranger was kidnapped and brainwashed into becoming an office worker named Flip Faxtoner. After Buzz regained his memory he used Klerm's machine to download Gil's personality into the Slam-bots. He is last seen in the episode eating cake with the robots.

Gil is generally sarcastic and thinks highly of himself, though he is generally amiable. According to Buzz, he has no friends, a fact Gil actually laughs about.

"Hmmm ohhh, I see you have visitors, well hmmm, we are special, aren't we?"

"The boss never lets MY friends stop by during work."

"Uh oh! Flip's being downsized. Hey! Can I have your parking space?"

Retrieved from "https://blosc.fandom.com/wiki/Gil?oldid=24930"
Community content is available under CC-BY-SA unless otherwise noted.