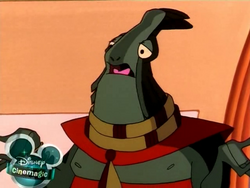 Garron is a high-ranking politician of the Galactic Alliance.

Ambassador Garron is one of the more unique aliens throughout the series. His skin is a dark shade of green with a brighter shade on the front half of his body. His hands have four fingers, and his feet cannot be seen under the red and burgundy robes he wears. Around his neck is a bangled necklace, with a diamond clasp upon his chest. Matching bangles are also upon his wrists.

He may be amphibian in nature due to his featureless skin and slit-like nostrils.

Ambassador Garron was eagerly awaiting Bathyosian representative, Senator Banda. Unbeknownst to the poor Ambassador, however, Senator Banda was actually Crumford Lorak in disguise in an intentional mix-up. Thankfully Team Lightyear came to the rescue and prevented the Raenoks from overtaking any of the Galactic Alliance officials as well as sabotaging any important treaties.

Not much is known about Ambassador Garron's personality. He is shown to desire peace and tranquility like most Galactic Alliance officials do.

None are known at this time.

Retrieved from "https://blosc.fandom.com/wiki/Garron?oldid=19249"
Community content is available under CC-BY-SA unless otherwise noted.