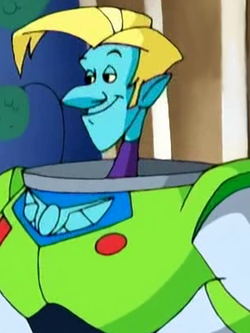 Fop Doppler is the second Tangean Space Ranger after Mira Nova. He joined Star Command out of a challenge to complete basic Space Ranger training in order to marry Mira. Despite his originally frail nature, he surprisingly showed an unprecedented aptitude as a Space Ranger, completed his training with the all-around highest test scores in history.

Like Mira, he is a Tangean Royal, complete with light blue skin. He has a prominent nose and sports a blond pompadour-like hairstyle. While original very scrawny, following his ranger training, he developed a rather muscular built.

Retrieved from "https://blosc.fandom.com/wiki/Fop_Doppler?oldid=24741"
Community content is available under CC-BY-SA unless otherwise noted.