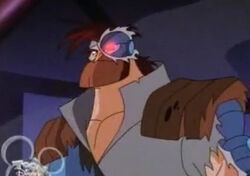 Flint is an android, specifically a gamma-series construction robot designed for ultra heavy lifting objects 400 times his own weight.

Though he is a robot he looks like a human with brown hair.

Some time after his construction, he worked as a stockboy for several organic owners 24 hours a day. This and being ordered around harshly made him resent "organics" as he calls them. Later in his life, he would live on the "Planet of the Lost" where he constructed his robotic shriekers and hatched a plan to strand organics on the planet.

He had his shriekers attack passing ships, causing them to crash on the planet below. Once stranded without means of escape, Flint tricked them that he was the first person the shriekers attacked and he became their leader. This enabled him to order organics around, and make them do the work, which he felt was justifible retribution for what the organics had put him through.

They later discovered that the shriekers were robots, so Flint tried kill them to prevent them from getting this information ot the settlers. However, while he was fighting Buzz, the manufacturing plant blew up, drawing the settlers to check it out. When they arrived, they learned the truth, forcing the crazed android to reprogram the shriekers to attack organic life. However, they were defeated when Mira got XR working again and sent out a jamming signal and Flint was defeated by Buzz in the fight.

He doesn't like organic beings because of the way they treated him in the past. He's the vengeful sort, as evidenced by his creating Shriekers to attack and trap organics on a deserted planet. He is also a good actor and master manipulator, having fooled the denizens of the planet thinking they could never escape.

Retrieved from "https://blosc.fandom.com/wiki/Flint?oldid=21611"
Community content is available under CC-BY-SA unless otherwise noted.