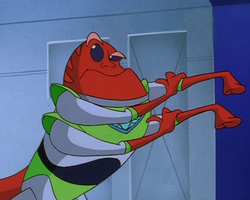 Flarn is a four-limbed Space Ranger who is often seen alongside other Rangers and on Star Command.

Flarn is a multi-limbed, red reptilian-like humanoid with four arms, three fingers on each hand, two feet, and a tail. His red skin and navy eyes with yellow pupils perhaps hint at an amphibious species. He appears to have no teeth and his voice has a deep, throaty ring to it.

He is trained in combat but has flaws as he does not pay attention from behind.

Retrieved from "https://blosc.fandom.com/wiki/Flarn?oldid=24479"
Community content is available under CC-BY-SA unless otherwise noted.