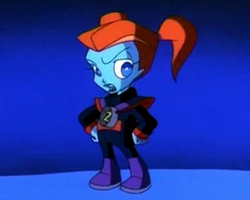 Feara is one of three clones created by Zurg, and the clone of Mira Nova.

She is a clone of Ranger Mira Nova as a child, approximately six to seven years of age.

She was created by Evil Emperor Zurg's Brain Pods. She was created to be part of an Evil Team Lightyear along with Zzub and Blister. Initially, they were disappointed that their team did not have their own robot like Team Lightyear does, but this changes after they construct X-Treme. Like any other Tangean, she has ghosting abilities. She was last seen trying to break out of a prison transport along with Zzub, Blister and X-Treme.

She can be arrogant and spoiled at times.

Retrieved from "https://blosc.fandom.com/wiki/Feara?oldid=24880"
Community content is available under CC-BY-SA unless otherwise noted.